My first experience participating in a kayak fishing tournament was the book definition of “beginner’s luck.” Let’s start this off by staying that I was no stranger to fishing but doing it out of a kayak…that was a whole new world! I had only technically fished out of a kayak once before and was a little nervous about taking on the Gulf of Mexico as my second outing.

I was entered in the annual Spankin’ the Specks Kayak Fishing Tournament that Everything Kayak hosts out of Gulfport, MS. No women’s division… all level playing field…. 3+ categories I could go for! This was a fantastic first timers’ tournament with tons of great people! I was super nervous that I was going to either bring in tiny-in-comparison fish or make a complete fool of myself. Surprisingly, I did neither! I was lucky enough to have a good friend join me on the water that was an experienced kayak fisherman and willing to give me pointers (when needed) without being bossy or condescending. Ed made sure I was not only safe in the water but prepared. He helped and offered me advice when I was picking out my gear. He showed me how to correctly launch from the shore. And when I hooked up to what would be a great fish, he coached me on how to bring it in. Like I said before, I had fished MANY times before out of a boat, but kayaking fishing is a different ball game!

We were just about to get off the water. At this point I had caught two trout, a flounder and a red fish but they were all too small to keep. I was getting frustrated and It didn’t help at all that Ed had caught a few that were all keepers. Finally, I was casting off a point and BAM… I’ve got a big one on the line. Ed starts to give me pointers on how to control the kayak and the fish simultaneously. I was excited but trying to stay focused and away from any rocks or snags. After a minute or two I am netting a 25 5/8th inch Red fish that would go on to win the Heaviest Red category in the tournament! I was ecstatic and officially hooked on the sport! The rush from a kayak catch doesn’t even compare to any other kind. You feel so much more of a rush being so close to them as you’re working to get them to kayak. I am so happy I decided to join in on the tournament and couldn’t wait to show off my catch! I was one happy girl! 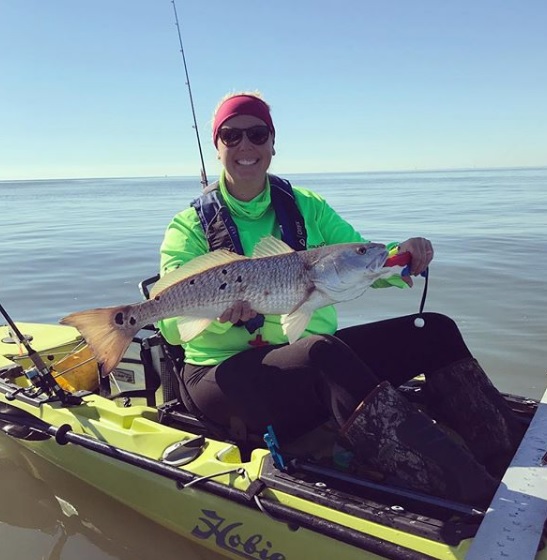